RAGE 2 for PC is a digital code with no expiry date. Once bought, this downloadable code will be delivered directly to your email address with no shipping cost. 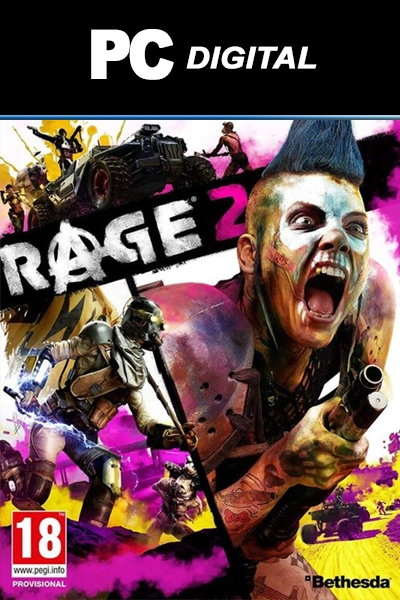 RAGE 2 for PC is a digital code with no expiry date. Once bought, this downloadable code will be delivered directly to your email address with no shipping cost.

RAGE 2 brings together two studio powerhouses: Avalanche Studios (masters of open world insanity) and id Software (creators of the first-person shooter) to deliver this carnival of carnage where you can go anywhere, shoot anything, explode everything. Published by Bethesda Softworks, RAGE 2 is the sequel to the 2011 game RAGE.

Dive headfirst into this dystopian world devoid of society, law and order. Discover what it is to be a mad man in Rage 2.

An asteroid has hit Earth and 80% of the world’s population has been annihilated. As humanity’s numbers continue to shrink, ruthless and bloodthirsty gangs roam the streets whilst the tyrannical Authority seek to rule over all with sheer force. In Rage 2, you play as Walker, the last Ranger of the wasteland and a threat to their power. You seek revenge as they had robbed your home and taken everything you once owned, leaving you for dead.

Immerse yourself in the violence of Rage 2 with ludicrous vehicle combat and racing, superhuman first-person mayhem, and a free-for-all world full of emergent madness. Tear across the wasteland that is left of our world, battling sadistic gangs to gather the tools and tech needed to crush the oppressive rule of The Authority!

Let your RAGE set you free.

What will you need to beat The Authority in Rage 2?

As Walker, you wield various firearms, tools and tech to fight against your enemies. Firearms include traditional guns (such as shotguns and pistols), the boomerang-like Wingstick and sci-fi weapons such as the Grav-Dart Launcher. Acquire new skills and abilities, like Overdrive, Shatter and Slam, as you explore the world of Rage 2. Get accustomed and use them to beat your foes.

Livecards.co.uk makes buying Rage 2 for PC as easy as pie! All you need to do is fill in your email address, pick a payment method, complete the payment and voila! The code is yours.