JUST CAUSE 4 for PC is a digital code with no expiry date. Once bought, this downloadable code will be delivered directly to your email address with no shipping cost. 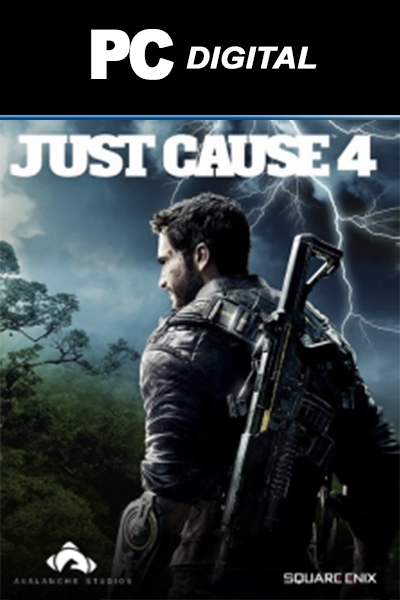 JUST CAUSE 4 for PC is a digital code with no expiry date. Once bought, this downloadable code will be delivered directly to your email address with no shipping cost.

The famous Just Cause saga is back with a stunning new game. The latest installment in the series will take you to a huge open-world in South America. Rico Rodriguez returns as the hero of the series to take down the bad guys.

Defend the Nation of Solis

Solis is in the tyrannical grip of a military group known only as the Black Hand, run by one of Rico’s greatest enemies. Liberate this South-American nation from the highly-advanced military group, described as the largest private army in the world. Uncover the truth behind Rico’s father and his past as you learn more about the protagonist you know and love.

With diverse 4 regions of mountains, fertile grasslands, tropical rainforests and scorching desert, there are plenty of breathtaking views to set the perfect backdrop for the action. Discover its natural splendor spread across 1024 square kilometers as you uncover the country’s secrets and disperse the chaotic conflicts. The elements also play a huge part in the game, with extreme tornadoes and lightning storms occurring often, and with players being able to control them to their own advantage. Skydive, base jump and free dive with the revamped physics engine in Rico’s famous wingsuit, and wreak havoc beyond your wildest dreams.

Get It Done, In Style

Using all the latest gadgets, weapons and vehicles available to you to complete your missions with a large variety of new vehicles such as military jets, helicopters, construction vehicles and turbo-fueled sports cars. Rico’s grappling hook has also been redesigned and is now fully customizable to complement new weapon mechanics including mid-flight RPG control and explosive bullets. There is no shortage of adrenaline in Just Cause 4 so strap in and get ready for some action on a whole other level.

How to buy Just Cause 4 PC?

Livecards.co.uk makes buying Just Cause 4 for PC as easy as pie! All you need to do is fill in your email address, pick a payment method, complete the payment and voila! The code is yours.