HOMEFRONT for PC is a digital code with no expiry date. Once bought, this downloadable code will be delivered directly to your email address with no shipping cost. 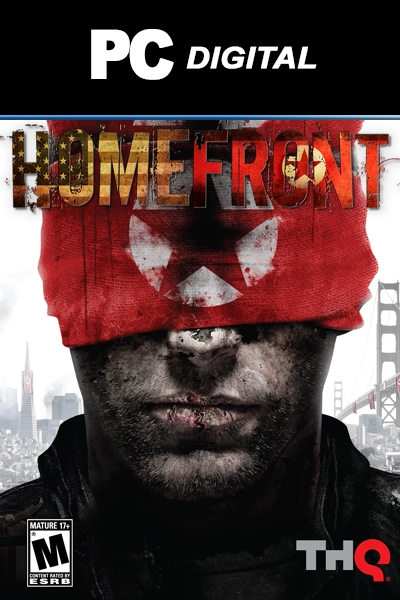 HOMEFRONT for PC is a digital code with no expiry date. Once bought, this downloadable code will be delivered directly to your email address with no shipping cost.

The year is 2027. The world as we know it is unraveling after fifteen years of economic meltdown and widespread global conflict over dwindling natural resources.

A once proud America has fallen, her infrastructure shattered and military in disarray. Crippled by a devastating EMP strike, the USA is powerless to resist the ever expanding occupation of a savage, nuclear armed Greater Korean Republic.

Abandoned by her former allies, the United States is a bleak landscape of walled towns and abandoned suburbs. This is a police state where high school stadiums have become detention centers, and shopping malls shelter armored attack vehicles. A once-free people are now prisoners… or collaborators… or revolutionaries.

How much is HOMEFRONT - STEAM

The standard price for HOMEFRONT - STEAM– will vary depending which store you purchase it from.

You can rest assured our codes will work for you. If in doubt or experiencing any type of issues with your codes, remember you can contact our live chat 34/7 with your inquiries.

Witness the human cost of war – a gripping story from the pen of John Milius is told through immersive, interactive 1st person cut scenes

How to buy HOMEFRONT

Buying from livecards.co.uk is as easy as 1 3 3! Simply fill in your email address, select a payment method and complete the payment!

Within a few seconds after your payment you will receive the digital code on your screen and to your email inbox (don't forget to check your junk folder if nothing appears!)

How to buy Homefront PC?

Livecards.co.uk makes buying Homefront for PC as easy as pie! All you need to do is fill in your email address, pick a payment method, complete the payment and voila! The code is yours.