FINAL FANTASY XIV: SHADOWBRINGERS for PC is a digital code with no expiry date. Once bought, this downloadable code will be delivered directly to your email address with no shipping cost. 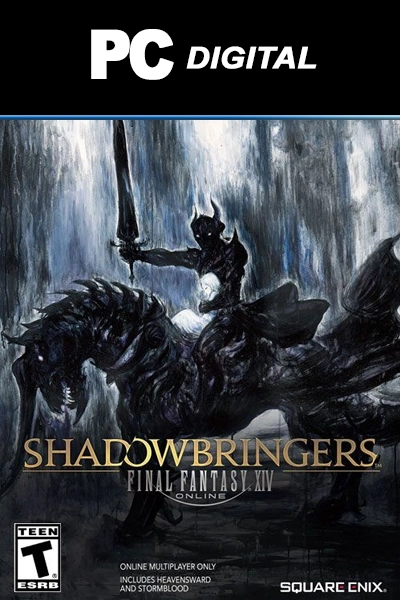 FINAL FANTASY XIV: SHADOWBRINGERS for PC is a digital code with no expiry date. Once bought, this downloadable code will be delivered directly to your email address with no shipping cost.

Take part in the next saga of the critically acclaimed FINAL FANTASY XIV with the new legendary expansion pack called Shadowbringers! To all you Warriors of Light: Embrace the Darkness and forge a new fate.

In Final Fantasy XIV: Shadowbringers for PC, explore exciting new lands, encounter exotic new races, take part in new jobs and fight alongside prominent new characters with the new Trust system as you embark on a new journey as the new Warrior of Darkness!

Alas, Ala Mhigo is finally free from imperial rule. However, this freedom may prove fleeting as the all-powerful Empire begins their move to reclaim this bloodied nation. They are looking to conquer all of Eorzea. Ala Mhigo is again in need of a hero to save them from this treacherous fate. They can no longer turn to the Warrior of Light, nor can they turn to the Scions… their souls still slumber, and still adrift. This realm is left to struggle without its previous saviors, for they have been beckoned beyond time and space – beckoned to the FIRST.

A new adventure awaits in a world where light ushers all unto oblivion! But as the Warrior of Darkness, hope is not yet lost. In Final Fantasy XIV: Shadowbringers for PC, be the savior of the realm as the new Warrior of Darkness!

As the hero becomes the villain, the Warrior of Light embraces the dark and embarks upon adventures that transcends worlds! Learn about the new lands and foes that await, and prepare for the trials ahead. Become the Warrior of Darkness! Remember, where there is light, there are shadows.

Expect bountiful new, thrilling and dangerous challenges that wait in the lands of Norvrandt.

Immerse yourself in the new systems and improvements of Final Fantasy XIV: Shadowbringers for PC that serves to captivate and enthrall you.

Livecards.co.uk makes buying Final Fantasy XIV: Shadowbringers PC as easy as pie! All you need to do is fill in your email address, pick a payment method, complete the payment and voila! The code is yours.