F1 2018 HEADLINE EDITION for PC is a digital code with no expiry date. Once bought, this downloadable code will be delivered directly to your email address with no shipping cost. 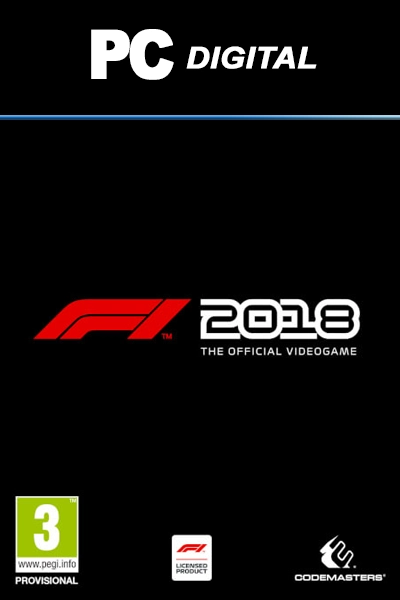 Excellent value for money, item arrived straight away in email after payment was made.

F1 2018 HEADLINE EDITION for PC is a digital code with no expiry date. Once bought, this downloadable code will be delivered directly to your email address with no shipping cost.

Fans of the F1 series will have the opportunity to complete their F1 car assemblage with the Headline Content DLC Pack; this DLC Pack adds not only the 2009 BRAWN BGP-001 but also the 2003 WILLIAMS FW25 classic cars to the game! Two man made machines of beauty designed to tear up the track, only add to an overall great edition to the Formula 1 game series!

The vastly well-received career mode has returned in F1 2018 but with more dynamic storytelling to keep gamers on the edge of their seat. The career mode of F1 2018 far surpasses that of previous Formula 1 games with fantastic features like, the best F1 car simulation model to date, beautiful graphics, more classic F1 cars than any previous F1 game in the series, and fantastic new circuits for this 2018 edition. Build on your reputation not only on the track but also during time pressured media interviews off the track that will drive your Formula 1 career. How will you steer forward with your career? Will you cause your agent to jump to a rival team and driver? Or will you achieve your goal and build the top team as Formula 1 2018 puts you in control of your own destiny.

Livecards.co.uk makes buying F1 2018 Headline Edition for PC as easy as pie! All you need to do is fill in your email address, pick a payment method, complete the payment and voila! The code is yours.

Excellent value for money, item arrived straight away in email after payment was made.