BATTLEFIELD V for PC is a digital code with no expiry date. Once bought, this downloadable code will be delivered directly to your email address with no shipping cost. 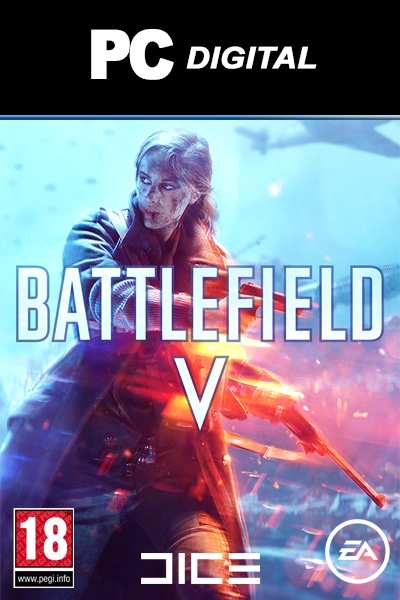 BATTLEFIELD V for PC is a digital code with no expiry date. Once bought, this downloadable code will be delivered directly to your email address with no shipping cost.

Enter mankind’s biggest conflict with Battlefield V as the blockbuster series takes you back in time to experience a first-of-its-kind version of World War II. Fight the enemy with your team mates in several exciting game modes like cooperative Combined Arms and vast Grand Operations, or witness human drama set against a global combat backdrop unfold in the re-invigorated single player War Stories. As you battle on epic terrains in unexpected destinations across the world, enjoy the most vivid and immersive Battlefield experience yet.

Battle in unpredicted but defining moments of World War II, as Battlefield transports you back to where it all began.

Take charge of your faction in entertaining all-out multiplayer modes loaded with exciting experiences like the Grand Operations mode, try your hand at classic modes like Conquest, or fight with your mates in the enthralling cooperative Combined Arms mode.

The Most hypnotic Battlefield experience yet

Witness human drama set against all-out global combat unfold in the exciting new single player War Stories. Ski your way down stunning Norwegian mountains as you crusade to retain power and control of nuclear weapon supply chains, cross enemy thresholds in the Northern limits of Africa with a gang of misfits contracted to wreak havoc, or join the battlefront with French colonial troops.

Go on a journey where new and interesting content continuously drops and transfers you and your team to a variety of epic WW2 destinations, where new gear and battlefields lay waiting.

CD-ROM: 16X speed CD-ROM or DVD-ROM (This game contains technology intended to prevent copying that may conflict with some CD/DVD-ROM, CD/DVD-RW and virtual drives.)

How to buy Battlefield V PC?

Livecards.co.uk makes buying Battlefield V for PC as easy as pie! All you need to do is fill in your email address, pick a payment method, complete the payment and voila! The code is yours.