ASSASSIN’S CREED: ODYSSEY for PC is a digital code with no expiry date. Once bought, this downloadable code will be delivered directly to your email address with no shipping cost. 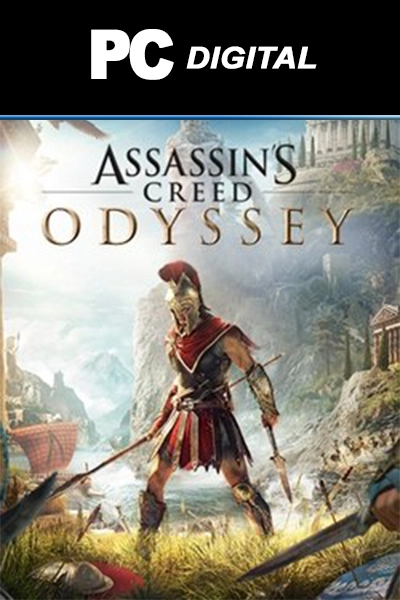 ASSASSIN’S CREED: ODYSSEY for PC is a digital code with no expiry date. Once bought, this downloadable code will be delivered directly to your email address with no shipping cost.

The latest addition to the long running Assassins Creed franchise is here: Assassins Creed: Odyssey. A follow up to the previous entry in the series Assassins Creed: Origins, Odyssey is the eleventh addition in the main series. While Origins changed the combat gameplay, Odyssey introduces dialogue options as a first for the series. Odyssey takes players to 432 BCE Greece and gives the player the option of either playing as a male or female with the introduction of all new characters.

Odyssey brings back many of the game mechanics of Origins, including the return of a bird that can survey the world, spot treasure, highlight and harass enemies, as well as the radial compass. Odyssey brings something new to the Assassins Creed table, with a full RPG implemented into the game with features such as, selecting your character gender dialogue options, branching quests and several different game endings. Romance options remain the same despite the character chosen. Gear can be selected with classification via rarity with all gear available to enhance with engravings.

By far the largest Assassins Creed game of the series to date, Odyssey is set in 432 BCE, 400 years after the events of Origins. The Sparta-Athens divide is represented in the game, as the story takes the player through a fictional secret history of the Peloponnesian War. Environments span from, forests, to mountains, to beaches, with access to a boat the player can use to sail the Aegean Sea in a similar manner to previous Assassin’s Creed games, Black Flag and Rogue. Take on the role of a mercenary and fight either for Sparta in the Peloponnesian League or for Athens in the Delian League. In a world on the edge of destroying itself, forge your own destiny and become a legendary Spartan warrior in Assassins Creed: Odyssey.

Livecards.co.uk makes buying Assassin's Creed: Odyssey for PC as easy as pie! All you need to do is fill in your email address, pick a payment method, complete the payment and voila! The code is yours.