7 DAYS TO DIE for PC is a digital code with no expiry date. Once bought, this downloadable code will be delivered directly to your email address with no shipping cost. 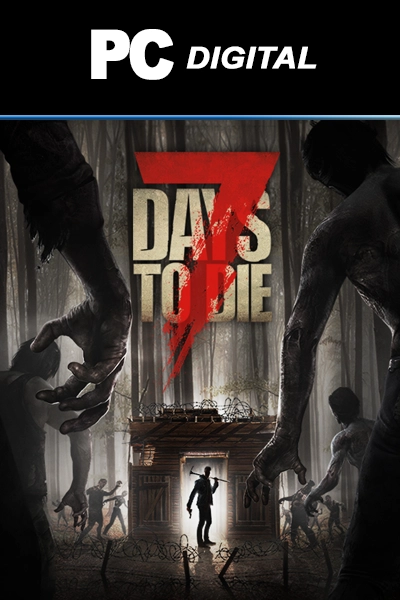 7 DAYS TO DIE for PC is a digital code with no expiry date. Once bought, this downloadable code will be delivered directly to your email address with no shipping cost.

Do you think you have what it takes to survive in a post-apocalyptic world with only wit and determination at your disposal? Try your hand at survival in Navezgane, Arizona - one of the last locations on Earth still standing after the nuclear fallout.

What is so Unique about 7 Days to Die?

7 Days to Die reimagines survival horror games by combining the adrenaline rush of weapon-based combat games with the creativity of crafting and world-building. Players can immerse themselves in an unparalleledcombination of role-playing, tower defence, survival horror and first-person shooter.

Features that Make the Game Worth Playing

Players must scavenge for supplies and pick up handy skills along the way if they hope to fight off flesh-eating zombie attacks from every corner. Through a unique Day/Night Cycle mechanism, 7 Days to Die changes up the speed and aggression of the zombies – during the daytime, zombies are sluggish and easy to outmanoeuvre while night-time transforms them into deadlier savage creatures that are harder to defeat. The surrounding post-apocalyptic countryside provides players with a treasure trove of materials for the construction of tools, weapons and fortifications.

Is There a Hidden Surprise Behind the Game Title?

Between all the world-building and zombie encounters, the title – 7 Days to Die – does not fail to remind you of the main event. Every seventh day of the in-game time, a horde of zombies is set loose upon the players’ current location for a ruthless unforgiving attack that can be survived only with sufficient groundwork.

Come and experience a complex and exciting environment where humanity is under threat from the consequences of its own war. Will the undead succeed in locating the hidden cracks in your fortress and chinks in your armour? Or will your survival instincts and resourceful prevail? Find out in 7 Days to Die!

Livecards.co.uk makes buying 7 Days to Die for PC as easy as pie! All you need to do is fill in your email address, pick a payment method, complete the payment and voila! The code is yours.