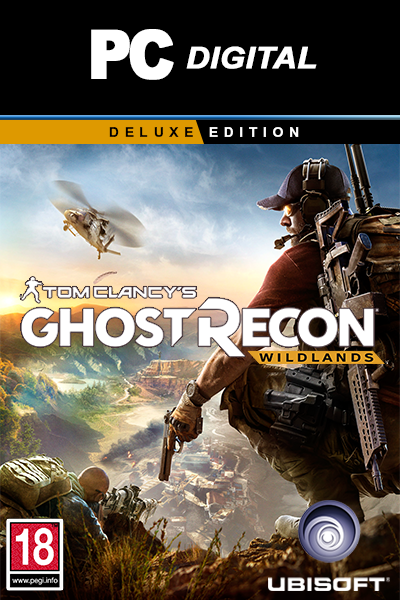 Go behind enemy lines in Ghost Recon: Wildlands. As a member of The Ghosts, a legendary US Elite Special Operations team, create chaos that will destabilize and eventually break the alliance between the Santa Blanca Cartel and the corrupt government.

The Santa Blanca drug cartel has transformed the beautiful South American country of Bolivia into a perilous narco-state, leading to lawlessness, fear, and rampant violence. With their corrosive influence growing, the cartel plagues the citizens of Bolivia but all hope is not lost. The Ghosts, an elite US Special Forces team, are tasked to combat the cartel and save the country from collapse.

You decide how to play, and every decision affects the world around you.

HDR enhanced for richer, more luminous colors.*Upgrade your Ghost with the Deluxe Edition which includes the game and Deluxe Pack that features exclusive weapon, gear and other digital content. Dominate the Bolivian wildlands with the Deluxe (Huntsman) Pack which includes: - The Wilderness Rifle: A unique Shotgun with an engraved finish. - The Huntsman motorbike: An exclusive dirt bike allowing you to go everywhere in the Wildlands- 3 Exclusive Gear Patches.- 3 Exclusive weapon camo to help you blend in the environment.- 3 Exclusive character customization items: The Light Hunting Jacket, The Sapper Backpack and the Oakley SI Straight Jacket Fire glasses.- 1 XP booster

Just enter your payment details, and ensure you will be the first on the battlefield!

Livecards.co.uk makes buying Tom Clancy’s Ghost Recon - Wildlands Deluxe Edition PC as easy as pie! All you need to do is fill in your email address, pick a payment method, complete the payment and voila! The code is yours.