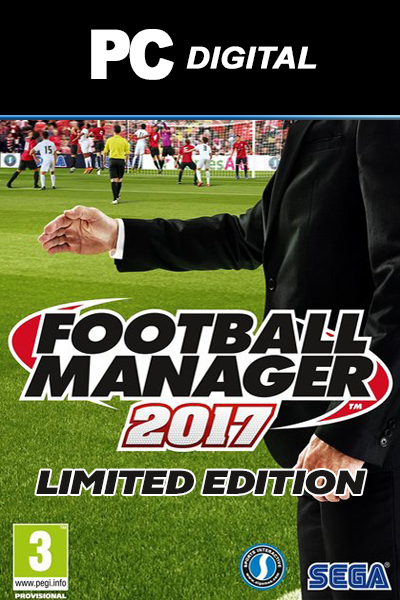 In this day and age of more realistic graphics and over the top gameplay, it's nice to know that there are still some games that know what they are, and stick to their roots.

Football Manager 2017 is one such title. No flash, just substance. Hours upon hours of life sucking (in a good way!) gameplay!

Take the reigns of the top team in your chosen division and conquer all comers; or take the lowliest of footballing minnows and nature and grow them, over many seasons until the Titans of the footballing world cower before your managerial brilliance!

Football Manager 2017 is football in its purest form, and available right now at livecards.co.uk!

Priced at £19.99, you will receive this, at no extra charge! Now, that's an amazing offer!

Football Manager Touch™ 2017 is the most complete football management game available on tablet. Manage real teams and real players, in more than 130 authentic leagues across the world and watch your games play out on the acclaimed Football Manager 3D match engine.

Take control of your favourite football team in Football Manager 2017, the most realistic and immersive football management game to date. It’s the closest thing to doing the job for real!

With over 2,500 real clubs to manage and over 500,000 real footballers and staff to sign, Football Manager 2017 elevates you into a living, breathing world of football management with you at the centre.

You’ll have full control of transfers and decide who plays, and who sits on the bench. You're in complete control of tactics, team-talks and pitch-side instructions, and you’ll follow the match live with our acclaimed 3D match engine. You’ll also deal with real football media, solve player-happiness problems and the board will watch your every move.

To order Football Manager 2017, we have kept it very simple. Do this as follows:

It's as easy as that! The code will now be displayed directly on the screen. The code is sent to your email address so that you have a copy. Would you rather have a player on the field? Take a look at the fun football game: FIFA 17. We are selling this game for PC and Xbox One.

Livecards.co.uk makes buying Football Manager 2017 Limited Edition PC as easy as pie! All you need to do is fill in your email address, pick a payment method, complete the payment and voila! The code is yours.