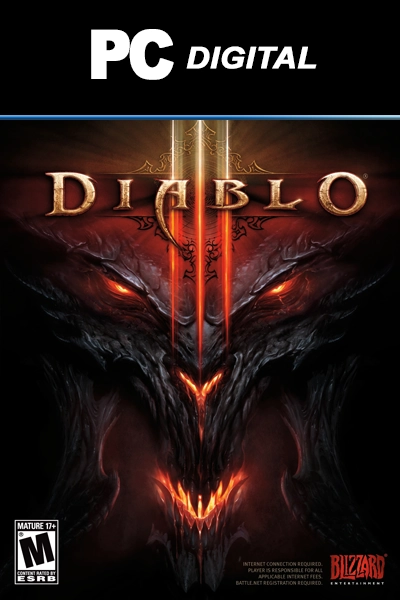 Diablo III is a fantasy Action Role-Playing Game (RPG). Only the third major release in what is considered by many gamers as the most iconic RPG franchise of all time, Diablo 3 continues the land of Sanctuary's battle against a reoccurring demonic evil, and provides players around the world with the opportunity to create the ultimate hero to quest against it with friends online, or on their own. Features include: classic dungeon crawling gameplay, a new batch of character classes, multiplayer options with friends and single player support with the help of AI companions, a new take on character skill assignment and health, and compatibility with Windows and Mac operating systems.

Two decades have passed since the events of the Diablo II: Lord of Destruction expansion pack, in which the demonic lords, Diablo, Mephisto, and Baal, set out across the world of Sanctuary on a vicious rampage, twisting humanity to their unholy will. Yet for those who battled the Prime Evils, the memory fades slowly. When Deckard Cain returns to the ruins of Tristram Cathedral seeking clues to defeat new stirrings of evil, a fiery harbinger of doom falls from the heavens, striking the very ground where Diablo once entered the world. This fire from the sky reawakens ancient evils, but also calls the heroes of Sanctuary to defend the mortal world against the rising powers of the Burning Hells once again.

How to order Diablo III

To order Diablo III we have kept as simple as possible. Within minutes you will have your desired game in your home. All you have to do is fill in your details, select a payment method and complete the payment. It's as easy as that! The code will appear directly below your screen and sent within minutes to your address so you have a copy.

Livecards.co.uk makes buying Diablo 3 PC as easy as pie! All you need to do is fill in your email address, pick a payment method, complete the payment and voila! The code is yours.