AGE OF WONDERS: PLANETFALL for PC is a digital code with no expiry date. Once bought, this downloadable code will be delivered directly to your email address with no shipping cost. 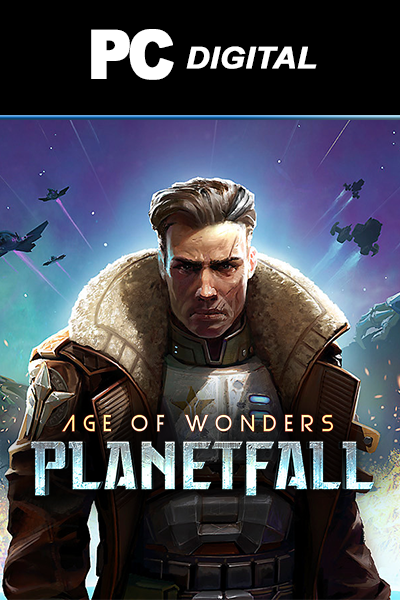 AGE OF WONDERS: PLANETFALL for PC is a digital code with no expiry date. Once bought, this downloadable code will be delivered directly to your email address with no shipping cost.

Factions are now stronger than ever, and the battle for dominance gets tougher in part 5 of the Age of Wonder’s Series. In this fifth saga, you’ll get to spy on enemies, secretly control other factions, prepare your troops for battle and invade enemy territories. You are now also able to unlock even more weapons of mass destruction and make political deals with others to ensure you have enough money, power, and resources.

The fifth-part of the Age of Wonder’s Series ‘Platnetfall’ is now available on our online storefront. Don’t miss out - buy it now and take your faction and game experience to another level!

What type of game is Age of Wonders: Planetfall?

Age of Wonders: Planetfall for PC is a strategy-based war game. Players will need to think, plan, strategize and execute in order to rise in the game.

What is the general plot of Age of Wonders: Planetfall?

The game is centered on a dystopian cosmic government-form called the Star Union. The Star Union is a galaxy that is trying to rebuild after a massive downturn. Societies are divided intergalactically into six different factions. Each faction battles one another for dominance. You, as the player, are given the commander position of a faction and must lead the faction to dominance. The main goal is to strip other factions away from their resources and have your faction be the one to enlighten the Star Union.

Can I choose my faction when playing Age of Wonders: Planetfall?

Yes of course! You’ll be able to choose a side once you start playing. Whether you decide to join dinosaur-riding Amazons or lead the miners in Dvar, we guarantee that you’ll have a great gameplay experience.

Is Age of Wonders: Planetfall a single or multiplayer game?

Age of Wonders: Planetfall for PC has both single and multiplayer game modes!

How to buy Age of Wonders: Planetfall PC?

Livecards.co.uk makes buying Age of Wonders: Planetfall for PC as easy as pie! All you need to do is fill in your email address, pick a payment method, complete the payment and voila! The code is yours.